We head out west to Las Vegas Motor Speedway. This is the first race of the twelve Chase contenders and drivers will want to capture the win to lock them in early for the next round. The top twelve drivers will be pushing and trying different things to make sure they can navigate the mile and half-track. Kevin Harvick and Kyle Busch will bring us to green. Denny Hamlin will make his way from the tenth position to the front of the pack. It appears that we have multiple cars set up for the change that will happen as the sun starts to set later. Chase Elliott was able to lead several laps. Along with Kyle Busch had a chance to lead multiple laps. However, Denny Hamlin will lead us through most of stage one and will get capture the stage one win.

Kyle Busch’s pit crew will get him out in front to start stage two. His team is hoping that they can score the win to keep him safe into the next portion of the chase. Kyle Busch brings us to the green and we quickly see three and four wide. Kyle Busch and Joey Logano make contact and Kyle got into the left rear of the car. Joey will have to come down and change left-side tires. Denny Hamlin was able to make it three-wide, and take over the lead. Chase Elliot got a huge run on Denny Hamlin and will bring himself back to the front. Green flag pit stops will happen and will play a factor. Kyle Busch is looking forward to tires due to a possible rub from contact earlier. The pit stops should cycle back around to Chase Elliott leading once again. Chase Elliott wins stage two. Stage points and wins are critical for drivers. Denny Hamlin and Alex Bowman bring us to stage three green.

Chase Elliot gives Denny Hamlin a huge shove, but Alex Bowman battles back for the lead. Alex is not able to hold it long, as Denny Hamlin gets another rub and takes the lead back. The caution has been thrown due to debris in one of the turns with less than eighty to go. The issue will be that this is still outside the fuel window for the drivers. Denny Hamlin will bring us back from the caution. Austin Dillion got hit with a pit road penalty and had to go to the back. Matt DiBenedetto has made his way into the top ten. Austin Dillion comes into the pits and they are doing some work under the hood of the car. This is going to hurt that team points-wise. With less than forty laps to go, we see several drivers start their green flag pit stops. However, with a little over thirty to go, we get a caution throw. Jimmy Johnson has a right rear issue. Multiple drivers that are on different pit strategies are now a huge beneficiary of this caution. Kurt Busch and Matt DiBenedetto lead us back to green. This is followed by an issue with Ricky Stenhouse Jr that brings out a caution. William Byron gets into the back of another driver brings out one last caution. Kurt Busch is still out front and will have a shoot out to the end. Kurt Busch will battle it out with Matt DiBenedetto and Kurt Busch will grab the unofficial win at his home track. 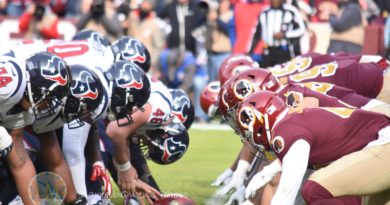 Redskins Lose More Than Just A Game vs. Texans