One of the worst feelings in life is feeling like you’re never good enough. This could be a feeling one may have at work. Maybe the company keeps hiring people to fill a role you applied for numerous times. Or maybe even at school. Perhaps you never get an opportunity to take the lead in an assignment despite all of the good grades you’ve gotten. Tyrod Taylor has proved he can start and should be a starter for an NFL Team. He started his career in Baltimore. That was the Joe Flacco era. Joe was solid, he won them a Super Bowl, but he didn’t move the needle. Then there was Buffalo, where he did get his shot. Tyrod posted impressive numbers there: 51 TD’s, 16 INT’s, and 8,857 Passing Yards. Then he was off to Cleveland when they just drafted Baker Mayfield. That was a 1-Stop-Go as Tyrod only appeared in just 4 games. They believed in Baker and that was his job. Tyrod was there for backup. And then we have the Chargers. That was another situation where they drafted a replacement for him. Not to mention, the medical staff punctured his lung which was deemed as unnecessary. And now, here we are in Houston with the Texans, where he’s once again filling a role as a bridge. DeShaun Watson isn’t expected to play this season and the Texans may look to tank to draft a “Franchise QB.” Tyrod SHOULD get a full season to start this year with Houston. If that’s the case, expect Tyrod Taylor to put up monster numbers just as he’s proven to be able to do in Buffalo. This season should be a tryout year for him as a team can look to appreciate him in the future. Perhaps teams like the Vikings, Falcons, Dolphins, Giants, Raiders, Washington or even the Steelers could be looking to upgrade next summer.

One of the busiest teams this past offseason was the Cardinals. The front office has figured it’s time for Kyler Murray to take that next step. In efforts to get him to make the leap, They refined their offense by adding WR AJ Green and RB James Conner. Defensively, they added JJ Watt. And the experiment thus far has proved to be a success. They may have had the offensive and defensive player of the week to start the season. Kyler Murray had 5 Total TD’s and led the offense to 38 Points. Kyler Murray is already an MVP Candidate and he made his case even more to start the season. Defensively, the Cardinals were a force as well. They didn’t beat up on a bad team. This Tennessee Titans team added one of the best WR’s in NFL History in Julio Jones, a guy many people still consider to be the best WR in the league. Not only did They shut down Julio Jones, but they shut down the best RB in the game as well, Derrick Henry holding him to just 58 yards on 17 carries. But the star of this game was Chandler Jones. He had 5 sacks for the game with 3 in just the first quarter alone! The Cardinals look good in week 1 as they hope to the leap into the playoffs this season.

I know you’re probably wondering why are the Dallas Cowboys on the down report already in just week 1? They went into Tampa Bay, taking on Tom Brady and the Buccaneers themselves in their first game after winning the Super Bowl. The season opener for all teams on a Single Game Night, Primetime action, and they went neck and neck with them and barely lost. Well, that’s just the thing. I don’t care if you almost won. I don’t care if it was Tom Brady you were playing against. I don’t care if this was Dak’s first action in a while. This is the NFL and we don’t have time for moral victories. A loss is a loss! There’s so much talent on that team and there really shouldn’t even be a debate who should win that division. The Cowboys are loaded and they have the best QB in the division. This down report is a reflection upon the coaching staff and management. A loss is a loss and there shouldn’t be any moral victories going around after losing a game like that. And not to mention, the elephant in the room is Zeke only had 11 Carries. That’s something to keep an eye on as the season goes on.

There once was a time where if you didn’t have a strong running game, you wouldn’t be considered a title contender. There also once was a time when you had your fantasy football draft, there would be nothing but RB’s taken early on within the first 2 rounds. Now, we see a ton of WR’s, QB’s, and maybe even a few TE’s taken within those 1st two rounds. Now in the NFL, the serious title contenders are teams with elite QBs and passing games. The days of running the ball being a priority are officially over. You can make the case that guys like Dalvin Cook and Derrick Henry will keep it alive. But now, those teams are more interested in passing the rock. One thing that stuck out to me over the weekend is that nobody cares to run the ball anymore, even if it works for them! There were only 5 players that had over 100+ rushing yards out of 32 teams and 1 of them needed an extra quarter of OT to do so. It’s only week 1, but whoever wants to win a Super Bowl must incorporate some form of a running game. We have seen how key that is even with our reigning Super Bowl Champs, the Tampa Bay Buccaneers. 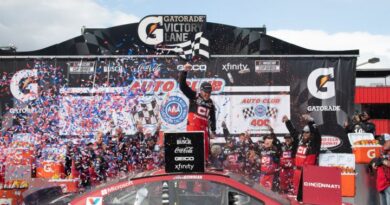 Bowman wins his first at Auto Club, takes one in California (3-1-20) Resiliency: Virginia State sneaks past Virginia Union in The Battle of I-95!