The Siegel Center- Better known as the STU- was electric on Saturday, Jan 22 as the St. Joseph’s Hawks came to take on the Rams of VCU. Treveon Graham had the honor of having his jersey retired in the rafters before the game. He expressed how deeply he loved his VCU Rams family! Throughout the game, his teammates, including Briante Weber, Mo-Ali Cox, coach Shaka Smart and more congratulated him on his accomplishments and his honor. He finished top 5 in scoring all-time for the Rams.

St. Joseph’s started hot with an 8-0 run to start the game. VCU bounced back with a 10-0 run of their own after numerous turnovers from both teams. With 6:48 remaining in the first half VCU led the Hawks 13-11. The game continued in a gritty manner with more turnovers on both sides, and a VCU technical foul turned the tide right before halftime. St Joseph led VCU 25-24 at the half after recovering from a 3:20 drought without a field goal.

VCU came out on a 6-0 run with some stellar defense and easy buckets by Ace Baldwin jr. and Kesahwn Curry. With 10:28 left in the game, Vince Williams connected on his third 3-pointer of the night to give VCU a 49-41 lead. VCU continued to control the pace until eight minutes left, even with Hassan Ward in foul trouble (4 fouls). At the 8 minute mark, VCU led 51-45 over St. Joseph’s.
Vince Williams came up big down the stretch with a three to put VCU up 10 with five minutes left, followed by a two-handed jam a minute later to extend the lead to 13. Baldwin had a crafty right-handed finish and a three-point sealing bucket, as VCU led 68-52 with 1:46 left in the game. The bucket forced the Hawks to call their last timeout. VCU finished strong and took the victory of St. Joseph’s 70-54. Vince Williams had 21 points and seven rebounds, while Ace Baldwin Jr. finished with 11 rebounds, five rebounds, and six assists. For the Hawks, Taylor Funk scored 22 points, 11 of which came from the free-throw line (100%). 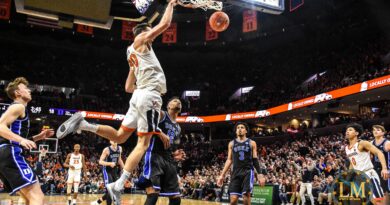