LANDOVER, MD  – On a day where the Washington Redskins organization welcomed alumni to FedEx field to honor their past achievements for homecoming weekend, the atmosphere was contagious as the fans piled in to see a great contest. Coming in to this game, both teams were leading their respective divisions with a (6-3) record. The Houston Texans came in to this game riding a 6-game winning streak, along with having a well rested squad who just came off of a bye week. The Redskins were looking to increase their lead in the NFC East to 3 games and ride the wave of Adrian Peterson’s comeback season to yet another victory.

Prior to the start of the first quarter, The Redskins organization welcomed the legends of the past to honor them for past achievements. The list included players such as: Joe Theismann, Doug Williams, Mark Rypien, Santana Moss, Clinton Portis, and many more. The best part of the ceremony was when Super Bowl XXVI MVP Mark Rypien delivered his speech and pumped up the crowd just before the game started. To see the team host this ceremony was not only an honor for the players of today and yesterday, but for the fans as well.

The game started with Washington receiving the ball and returning it to the to the 21-yard line. The Redskins would only gain a 1-yard by a rush from Adrian Peterson, as they struggled to gain momentum out of the gate. The team would go 3 and Out, Punt the ball 51 yards, and see a fair catch by Houston at the 27-yard line. Houston would start the game strong by scoring a field goal and a 16-yard touchdown catch by DeAndre Hopkins from QB Deshaun Watson in less than 8 minutes of game time to lead the Redskins 10-0 at the end of the quarter.

Starting the second quarter trailing the Texans by 10, The Redskins were in scoring position after making their way down the field at the end of the first quarter. It only took 46 seconds for Adrian Peterson to score a 3-yard rushing touchdown on a sweep to the left side of the endzone. The score by Peterson would give him 104 rushing touchdowns for his career and tie John Riggins for sixth on the all-time Rushing Touchdowns list. The following drive by the Texans would end in a pass by QB Deshaun Watson getting intercepted by Middle Linebacker Mason Foster of the Redskins defense for a 4-yard return. The ensuing drive would end in a punt, the Texans would follow suit, and the Redskins would have the ball again with 9:21 left in the quarter.

Upon receiving the ball, the Redskins were only trailing by 3 points and looked poised to at least tie the game up midway through the second quarter. QB Alex Smith was in command of his offense and connected with Trey Quinn for a 13-yard completion as well as Jordan Reed twice to help move the chains. Along with his passing success, Smith would rush for a 9-yard gain for a first down at the Houston 33-yard line. Upon a 2-yard sack by Whitney Mercilus, Smith would attempt a pass to Jordan Reed in the endzone only to be intercepted by Safety Justin Reid of the Texans defense for a 101-yard Touchdown.  The Texans would lead 17-7 following the score and the Redskins would enter halftime trailing by 10 points.

The third quarter would start with Houston receiving the ball, Washington kicker Dustin Hopkins would add to his season total of touchbacks to enforce a start at the 25-yard line for the Texans. HaHa Clinton-Dix would force DeAndre Hopkins to fumble at the Washington 35-yard line and would be recovered by Mason Foster as he would continue to have a great game thus far. The next drive would start off well for the Redskins as they would move the ball well down the field. Alex Smith would scramble for a 15-yard gain to earn a first down and regain the confidence of his offense going forward. Two more first downs would occur on a 14-yard catch by Jordan Reed and a 9-yard catch by Josh Doctson, followed by a 1-yard run by Adrian Peterson. While the machine was well oiled and chugging along, nobody in the crowd could have anticipated what was about to transpire.

The Redskins were at the Houston 24-yard line with 7:56 remaining in the third quarter, the offense remained poised as they stepped up to the line of scrimmage, and the crowd was ready for yet another red zone attempt by their team. Little did we know what would happen next. The offense would be in Shotgun formation, QB Alex Smith would drop back and get sacked by Houston CB Kareem Jackson, but this would be no routine play for either team. Smith laid down on his back clutching his leg as it appeared he was thriving in pain, 33 years to the day that Redskins legend Joe Theismann endured a career ending leg injury. The crowd in awe, the players panicking, while the veteran quarterback was in obvious pain. The journeyman quarterback would be carted off the field, but not before giving a thumbs up to the crowd to let them know that he’ll be back again.

Washington would punt the ball immediately after the incident and prepare backup QB Colt McCoy as their defense would take the field. On the fourth play of the ensuing drive, Houston’s QB DeShaun Watson would be intercepted yet again, but this time by Linebacker Preston Smith for a 3-yard gain. This would setup a drive for the Redskins to start at the Houston 13-yard line and put hope back in to the hearts of the fans in attendance along with the millions watching at home. Colt McCoy would sling a 9-yard pass to Jordan Reed and just like that the team was back in the game by only trailing17-14. The remainder of the quarter would see a field goal for the Texans by Ka’imi Fairbain to increase the lead to 20-14, and the Redskins would have possession going in to the fourth.

The final quarter began with 5-yard scramble by Colt McCoy to the Houston 41-yard line, followed by a 3-yard rush by Adrian Peterson. McCoy would complete an 11-yard pass to Josh Doctson, followed by an 8-yard completion to Trey Quinn to set their team in to scoring position. Adrian Peterson would score on a 7-yard rush to earn his 105th, passing John Riggins for sixth on the all-time list, and give his team a 21-20 lead. Things were looking up for the Redskins and the crowd was re-energized despite the blow from the injury to the teams starting quarterback.

Houston would score a field goal on the ensuing drive and regain the lead at a score of 23-21. Washington would punt on the next drive, followed by a 45-yard missed field goal attempt for the Texans after eating up nearly 4 minutes of the clock to give the Redskins the ball back with only :52 remaining in the contest. McCoy would do his best to put his team in position for a game winning field goal with a 9-yard scramble and a 11-yard pass to Trey Quinn. On 4th down, with only :08 left in the game, Dustin Hopkins trotted out to the field to attempt a 63-yard field goal, only to be short of the goal post, and give the Texans their 7th straight victory.

Following the game, Washington Redskins Head Coach Jay Gruden had this to say on the injury to QB Alex Smith, “He broke his tibia and fibula and fracture. He will need surgery right away.” He went on to say that he had not seen anything of the injury yet, that he knows it was very painful for his starting quarterback, along with this being heartbreaking to so many people and that he hates to see it happen to a guy like Alex. You could tell with his demeanor that he was devastated with the results of the game, but hopeful that the team could bounce back for their Thanksgiving day matchup against the Dallas Cowboys.

This week the Redskins travel to Dallas to take on the Cowboys in a special holiday game, where Colt McCoy last earned a victory as a starting quarterback when he defeated the Cowboys on Monday Night Football. The team remains hopeful, but with only three full days to prepare things look dismal for the Redskins heading in to their contest at Jerry World. The team signing of QB Mark Sanchez on Monday only adds to speculation of how well equipped is this team to earn victories with only six games remaining. Washington continues to have a lead in the NFC East with a (6-4) record, but can they hold on to it? The injuries are piling up now and could throw a major wrench in to what we thought might be a stellar season by a great group of talented individuals. 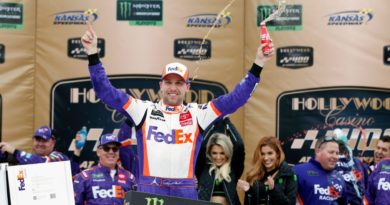